To be free. What does that actually mean? Not in a social or even political sense. But as a human being? As a musician? When we speak of free improvised music, freedom is the mother of all things. And that in a literal- al sense. You free yourself from yourself. As human beings, we always act with the sum of what we have collected, stored and reflected in all the years before. An improviser does not have to apply his knowledge and skills intellectually, but instinctively. So, that things do not emerge by necessity or intention. They simply happen.
Paul Lovens and Hans Koch are both masters when it comes to such development processes. Especially the duo formation challenges self-liberation like no other constellation. In a solo setting, instinct is confronted too much by the intellect and there is no counterpart to help when the struggle between holding and letting go seems to be lost. And in a larger formation? In challenging moments, silence becomes a tempting alternative. This does not work in a duo. Every tone, every sound, every noise demands a response. And the sum of the sounds again demands answers. Or counter-questions. Or provocations. In a duo, the tones are released, set free, and the originators orient themselves to the developing sound architecture. In the best case, the sound takes control of the narrative and the musicians become suppliers…and are amazed themselves by the dancing molecules that begin to map the space in constantly changing constellations. This process is always also a departure. The musician leaves the place he was in before the very first note. From this point of view, it is not surprising that Koch and Lovens chose as title for this record „CloudCuckooLand“, named after the place that Aristophanes describes in his play „The Birds“. It is the name for a world that people can only dream of. Only those who are able to fly can reach this vanishing point. This place where bureaucracy, mistrust and envy have no place anymore. If we stay with Aristophanes, then Lovens and Koch are Pisthetaerus and Euelpides, the two main protagonists of „The Birds“. Two men who transform themselves into birds and thus fulfill their dream of flying.
Lovens and Koch knew each other briefly from larger for- mations, but these recordings from a tour through Eastern Europe in 1992 show the two of them as a duo for the first time. It is their second joint release. In 2010, a live recording from Rome in a trio formation with singer Sabina Meyer was released under the title „Mood Swing 3“. The order of the four tracks of the present album corresponds to the chronology of their recording date. Their titles only refer to the respective departure point of their flights, their endeavour to find the place of fulfilment, to approach it from a different perspective, to reformulate it, to create it. At the beginning of „In Sofia“, the first piece, one can still sense the inner struggle to which the two protagonists are subjected. Both defy gravity, which tries to keep them on the ground. Slowly but surely a first flight altitude sets in and the musicians gently abandon their function as pilots, begin to ignore the flight instruments in the cockpit and subsequently begin the state of free floating. The following three pieces are each based on the experience of the previous ones and underline the steadily growing flying skills that the duo has acquired over time. The result of this self-liberation leads to a dialogue between two poets who, with their pas de deux, cause the molecules to vibrate in a way that even listeners willing to travel are freed from any fear of flying and inevitably become partners in crime. It is not only the seriousness and the uncommon profundity of these four dialogues, but also the palpable joy of life, paired with a humour à la Buster Keaton, which not only gives the musicians, but also us listeners, moments that the Germans call „Sekun- denglück“ (seconds of happiness).
„CloudCuckooLand“ also documents in an impressive way that the creation of a new world is connected with confrontation and friction. It is only when two apparently different characters, who challenge each other to the utmost, are brought territory. In the field of tension between form and content, they are among the guerrilla fighters who have dedicated themselves to the latter. Pisthetaerus and Euelpides are described in Aristophanes’ „The Birds“ as two middle-aged men, the same age as Lovens and Koch were when these recordings were made. However, it is only thanks to their acquired wisdom that 28 years later they decided to share their very personal journey to „CloudCuckooLand“ with us. – Rudolf Amstutz, November 2020 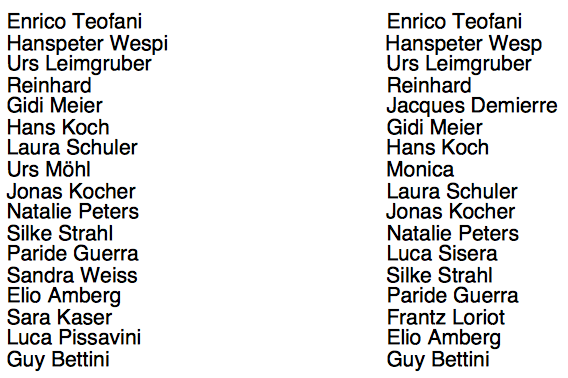 This is is the second Concert of the SWISS TeleOrchestra
When making music telepathically, each musician is alone in his or her rooms to improvise with the other musicians in isolation. No musician can hear or see the other player. Thanks to a synchronized signal, each individual musician starts the audio recording in their own rooms and plays for 40-50 minutes, depending on their musical perception. Afterwards, the individual audio recordings are stopped and sent to the studio. The tracks of the individual musicians are synchronized exactly with the time code. The sound engineer only makes an effort to balance the volume. Only then does the music of the entire ensemble emerge as a unified work and become an audible experience.Thanks to recording technology, the music of a telepathic ensemble is heard for the first time in the world

Michael Pisaro
„Achilles, Socrates, Diotima “The Poem of Names, No. 2“

„Achilles, Socrates, Diotima “The Poem of Names, No. 2“ - Michel Pisaro

Track 1 - But There Were No Words

DVD – Now Available – A Film by

Track 1 - Koch/Schütz/Studer + Shelley Hirsch - What Pushes Me Up, What Goes Down the Drain - Let It Snow

Turn Around (Version One)